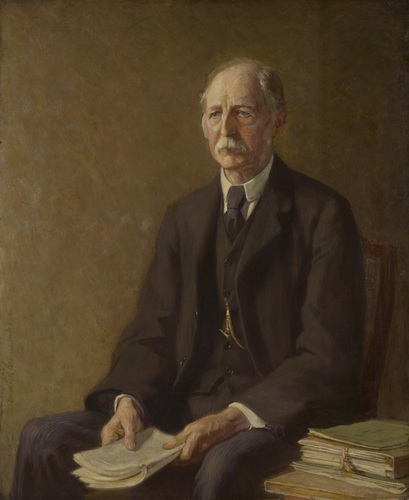 Thomas Coglan Horsfall (1841–1932) was the son of a wealthy Manchester cotton manufacturer. He became a partner in the family firm in the 1870s, but poor health meant that he was not active in the business and instead devoted himself to a range of social and charitable projects. He was a devout Christian and his religious faith underpinned his interest in many causes, including the improvement of workers’ housing and the elimination of slums. A tireless philanthropist, pamphleteer, lecturer and committee member, Horsfall was involved in many campaigns to improve the lives of working people and the moral and physical education of their children.

A disciple of John Ruskin, Horsfall became convinced not only of the social and individual benefits of access to art, but of its necessity, particularly in a city such as Manchester, where many people had little contact with nature or the daily experience of visual beauty. He explained his position in a lecture entitled The Need for Art in Manchester:

‘Art is not only a useful thing… but is, certainly for all dwellers in large towns, a necessary for health. Neither the community nor the individual, who is not affected by the influence of Art, can possibly live a full healthy life in a modern town.’

The creation of the Manchester Art Museum was due entirely to his vision and perseverance, sometimes in the face of apathy and resistance. He remained closely involved in its activities for many years, eventually resigning as President in 1920 when his health deteriorated further.

Reference
Thomas Horsfall, The Need for Art in Manchester, 1910.

Read more about the Legacy of Thomas Horsfall here.